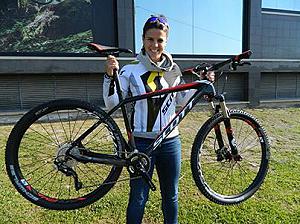 Laia Sanz confirmed their participation in the IBZMMR14 has been 13 times world champion women's Trial, 10 times European champion, has won the Dakar Rally bikes women's category in the years 2011, 2012 and 2013, and it has also been a champion Women's Enduro World in 2012 and 2013.

The Catalan brokerage has been decorated with the National Sports Award in 2007, best Spanish athlete in 2012, Gold Medal of the Royal Order of Sport Merit in 2013 which is the highest honor given to sport in Spain.

Laia is one of the greatest athletes that has given our country.

Laia adds to the extensive range of great athletes who have already confirmed their participation in this edition, such as Margaret Fuller, Rocio Martin, Dori Ruano, Carlos Checa, Celina Carpinteiro, Soffia Pezzati, Sandra Klomp and etc ...

http://www.ibizabtt.com
Back
Go to top | Print | Share with a friend
Publicidad